Back in the Hospital Again

Thank you for all the prayers!  We are really feeling them, and I think we've actually found the cause of the granulation tissue around the feeding tube button.  This morning when we changed the bandage we saw a small black spot in the tissue, which Mom said looked to be a stitch.  I called the surgery nurse, Grace, and she was able to make time for us right away.  It actually was a stitch, which had most likely irritated the area and caused the growth of tissue.  She cauterized it and helped me change the button, which was not nearly as traumatic as I'd expected.

We had again been very concerned about Levi because he continues to vomit, have only liquid bowel movements, screaming and gas.  I hadn't been able to contact our GI doctor, and since Grace is also a GI nurse, she helped us out.  She contacted a GI physician new to Cardinal Glennon and had Levi evaluated while we were here.  The doctor agreed that something is not right, and she admitted him for observation.  She has ordered all the normal tests that we have already been through twice in the last two months since the feeding tube surgery.  We expect them to find the same thing, but I know this is the starting point.  Please pray that they find the core issue and can come up with a plan that will actually work this time!  To put it into perspective, I can describe what Levi must be feeling as having the stomach flu continuously for two months.  NOT something anyone would want to go through.  We appreciate all of you so very much! 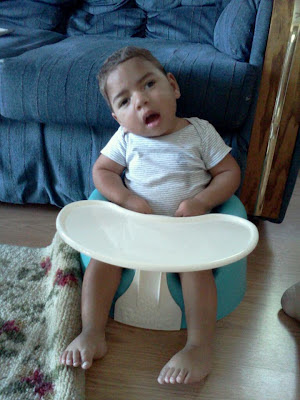