Last week was a good week.  Levi has some fussy times before bedtime due to teething, but compared to the way he used to scream, this is like a walk in the park.  Poor little guy, his bottom middle gum is so white that tooth should be shooting through any minute, and his canine and molar areas are a combination of bumps and very swollen gums.  His whole little mouth must hurt.  He's learned to chew on the bottle nipple.  It's so cute!  No matter how hard I try, though, he refuses to take a teether.

I've still been holding the spoon and bottle in front of him during mealtimes so he can focus on it before I put it in his mouth.  He seems to be looking at it and recognizing it faster than before, and his eating has gotten even better than it was.  It's so adorable to watch him chew :)

Friday we visited the ortho doctor and learned that Levi will need the brace until he is crawling and weight bearing on his legs on a regular basis.  Even then he will need to wear it at night.  I was disappointed by this news at first, but Dr. Puryear told us that the x-ray showed that Levi's hip is looking excellent.  He said we don't have to use it strictly 23 hours a day, which also made me happy.  Sometimes I just like to hold him without that darn thing on.  BUT we are still being pretty strict about it.  I never want him to have to go through having a Spica cast again, and I'll do whatever I need to so we can avoid it.  We have begun working with the therapists this week on weight bearing exercises.  Levi continues to improve with his head control.  He's really working on it all on his own!  Good job, Levi!

This weekend was his first camping trip, and we had a McDonald family reunion.  Many of us camped the whole weekend, and it was great to relax and catch up with everyone.  It sure was hot, though!  Thank God for air conditioning!  Levi did great.   He loves the sun and warm weather, and this weekend was no different.  He enjoyed being passed around and even slept all night!  He must have been tuckered out.

Here are a few pics of the weekend: 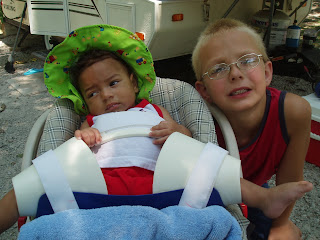 Levi in his bonnet, as Aunt Shell calls it :) 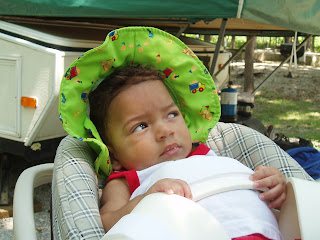 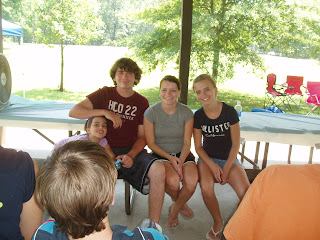 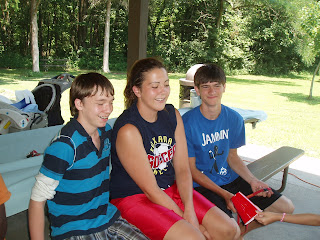 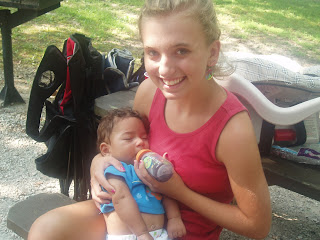