There's a lot going on in Levi's life these days.  Since starting the Charlotte's Web strain of CBD oil (oil from the marijuana plant that contains only medicinal cannabinoids, not the THC compound that causes a high) he has gained so much strength.  We initially began using Charlotte's Web for seizures, and sadly we have not seen much relief in that arena, but he only has a handful of daily seizures now, and so the epilepsy is not causing him much trouble these day, thank God!

What we have seen, though, is a huge increase in his cognitive ability, strength of body in areas such as head and trunk control, GI relief, and more.  CBD oil has taken a child who was in daily pain and turned him into a happy boy who greets the day with a smile, and ends the day in the same manner.  It is truly a Godsend!

Charlotte's Web CBD oil is available across the country with no prescription at CWHemp.  Levi currently takes .5 ml twice a day of the Everyday Advanced oil.  Since it isn't covered by insurance and it's very costly, we will remain at this dose for a while.  In the future, however, we hope to see better seizure control with an increase in dosage.

Selective Dorsal Rhizotomy is a surgery for those with spastic cerebral palsy, to alleviate the spasticity (extreme tightness) in the muscles.  This is an explanation of the procedure, from the St. Louis Children's Hospital website.

Though Levi always attends Cardinal Glennon Children's Hospital in St. Louis, this procedure is done by a specialist at St. Louis Children's.  Though it is typically done to help children with CP walk better, Levi is being considered for the surgery even though he is non-mobile, due to the extreme tightness in his leg muscles, and especially the turning in of his feet.  He receives Botox treatments in his muscles to loosen them, but the muscle for the feet are so deep they can't be helped with Botox.  It is our hope and prayer that the dorsal rhizotomy will help.  Another huge plus is that the benefits of this procedure last for a very long time.

We have the packet almost completely filled out, and will be waiting for word from STL Children's as to whether he is a candidate.

Eye Gaze Technology uses specialized equipment that works with eye tracking.  Using something like this, one can make choices, speech, and other vital communication skills using only the gaze of an eye.  For someone like Levi, who is non-verbal, but can understand what we say, this makes communication much easier for him.

Though he has learned to shake his head for no, the limited ability of his body keeps him quite trapped, unable to tell us what he thinks or wants.  Eye gaze technology has the potential to open up the whole world to him!  The process is likely a long one, but we are hoping to do a trial soon to see if this is something that Levi could learn.  We all believe he will be very successful at this.  His vision teacher mentioned that another student she sees does very well with this technology, and Levi's vision and alertness is more advanced than that child's. We are praying that this will bring him out from the loneliness of  his own mind, to be able to communicate his likes and dislikes, wants, and desires to us! 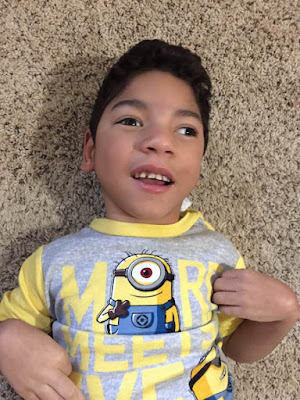