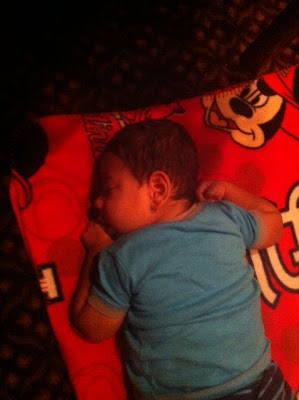 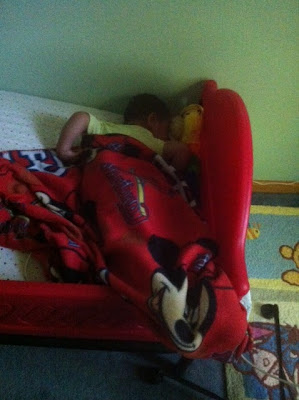 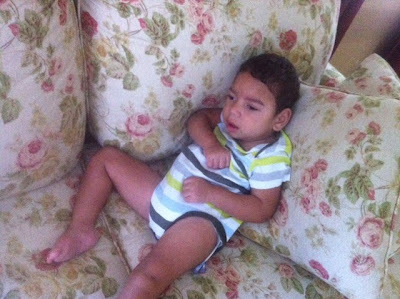 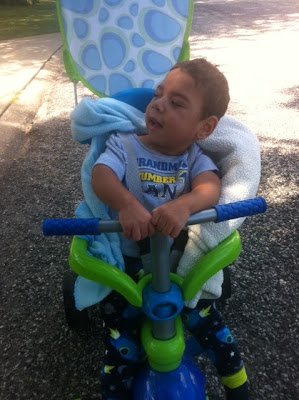 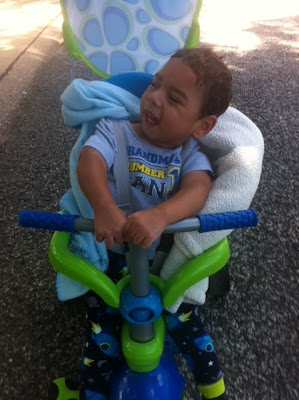 So for the past few weeks, Levi has been dealing with difficulty breathing, persistent low grade fever, and vomiting old blood.  He had one of the worst screaming fits I've ever seen on Friday, and we brought him into the ER again.  He had Toradol, which always takes away his pain, even after surgery, and it didn't even dim the pain, then Benadryl as well, which works well to relax him and help him sleep, and it didn't help either.  He was admitted and I fought with the GI resident so he could have morphine.  (GI docs don't like to give narcotics because it slows down the intestinal tract, but when pain is an issue, it has to be top priority!)  They wanted to give him Ativan instead, but I flat refused.  He had that once before, and it caused a long period of seizures.  The first dose of morphine also needed a Benadryl chaser, but it actually made him comfortable and he was able to sleep.  They sent him to x-ray for a full body scan to make sure he hadn't fractured a bone, and also the normal workup of obstruction series and shunt series, as well as bloodwork.  Everything came back normal.  His amylase was high, which points to pancreatitis, but they repeated the test twice and it was normal both times.

Neurosurgery and neurology were consulted to be sure that the shunt and seizures were not to blame.  Both of these teams feel confident that this is not the case.  An EEG was performed and the results were pretty much the same as the last one over a year ago. He's seemed to have a returning of some reflux symptoms, so they tested his stomach ph, and sure enough it was very acidic, so they doubled his dose of Nexium.  Severe reflux can actually cause all the symptoms he's been having, so I'm praying that this is our answer.

In the last week the only food he's had is about 24 hours of continuous half strength formula.  Some days he even had a hard time keeping down the Pedialyte.  Our dietitian has increased his calories again, and he was started on feeds at 15 ml an hour a couple hours ago.  He's thrown up twice since, but also twice this morning, so I don't think it is related to feeds.  His vomiting during this whole illness has been random, not correlating with feeding, so I do feel confident that it is not the diet or an intolerance to the formula.

He's comfy and sleeping right now.  We may be able to go home tomorrow, depending on how he tolerates the feeds, and if he's not having pain.  Please pray with us that the new dose of Nexium is the answer we've been looking for.  I want to take him out to play in the pool, and go for walks, to the park, church, and have fun with him.  I want him to feel good again.  Life may never be "normal" for us, only in the sense that we are not like everyone else, but it can still be wonderful.  That's what I want for him.  Wonderful.
Posted by Lynn at 9:28 PM No comments: 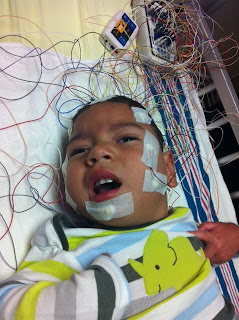 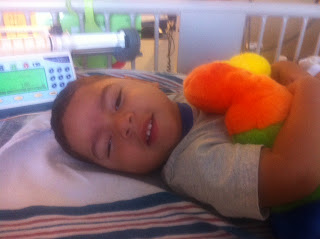 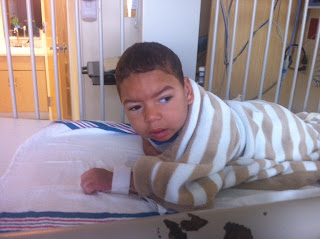