Once again, I'm thankful for all the prayer going up for little Levi! His head control continues to be awesome, and just gets better and better!  Every time I pick him up and his head doesn't flop back I can't help but smile in thanks and feel so hopeful for the future! This is such an important milestone, everything else is built off of it!

His neurologist agreed to let him go back to 4 mls twice a day of Lamictal.  We will see how that goes before we discuss weaning Phenobarbital.  This dosage seemed to bring the seizures down to the smallest number we've ever seen, and I'm praying that they will just dwindle until they are gone.  He's been through so much and is such a trooper, I'm ready for him to be done with it. His first birthday is just a few short weeks away. Sure would be nice to start his second year seizure free!!!!! 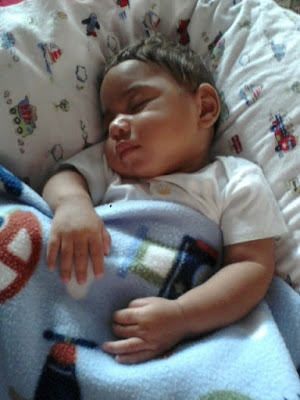 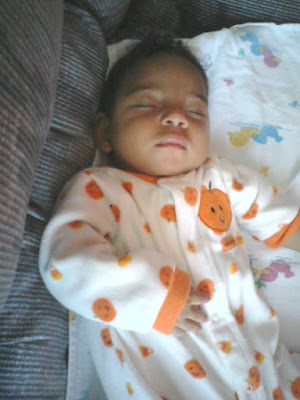 Thanks to everyone who has been praying for Levi to gain head control!  Since the day I asked for prayer he has been working very hard to hold his head up, and is doing an excellent job!  All his therapists have noticed a significant difference, as have we!  Thank you and please continue to keep his head control in your prayers.  Once he learns that the sky is the limit!  Also, as always, please pray for his seizures to STOP!  They have gone back up again and he is having 30-50 a day again.  He was doing so well before!  I don't know if the shots are to blame, or the higher dose of Lamictal. I plan on speaking to the neurologist tomorrow.  I would like to take him back down to 4 mls of Lamictal because he was doing so well at that dosage, and then begin weaning Phenobarbital.  I would like for him to come completely off of that med!  He has been on it since he was three weeks old, and the original plan was for him to come off it within a year.  I can't believe he's only about six weeks away from his first birthday!  If you could please add wisdom for making the right decision, I would so appreciate it!  This poor little baby is progressing despite all the sedating meds (5) that he is on, and the daily seizures.  I expect him to hit the ground running and catch up quickly once everything is brought under control.  You can see that he tries so hard!  Thanks again and God Bless!
Posted by Lynn at 2:25 PM No comments:

Today has been a busy day!  We ran some errands, shopped for some Fall decorations for our new house, and tuckered Levi out completely.  Yesterday was his first day with the increased dose of Lamictal, and he slept almost all day.  His seizures were down, but I didn't know if it was from sleeping so much, because he typically doesn't have them when sleeping.  It usually takes him about three days to get used to new meds, so I expected him to sleep a lot today too, but I was wrong.  He took a tiny morning nap and then was up the rest of the day.  I just put him down for his afternoon nap and it's almost 3:00!  He's been so smiley today.  I was bouncing him on my hip and he grinned bigger than he ever has, I thought he was actually going to laugh!  It's great to see him so happy.  AND even though he's been awake, his seizures are still way down today!  This is so encouraging!  Please pray with us that the seizures will stop!  Also please keep his head control in your prayers.  Today he's been doing well with it.  He needs to be able to hold it consistently so he can learn to sit, crawl, walk, and run and play with other little boys!  Thanks for all your prayers, we are praying special blessings on anyone who has said even the smallest prayer for our Levi! 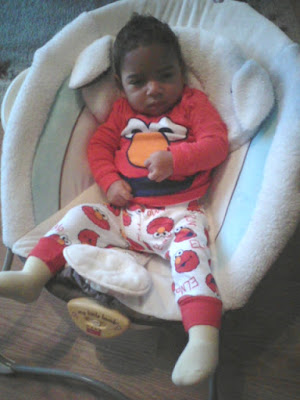 I pulled my shirt up! For the past two weeks we have been moving.  Oh, the move itself wasn't too bad, we got all the furniture in and arranged within a weekend, but the back and forth to the old house trying to get it in order has been torture!  I have 4 cats, and can only bring 2 with me, so I have been desperately trying to adopt out the sweetest, youngest kitties, but have found no interest.  I'm to the point of being forced to send them to a shelter, which is NOT what I want for them, so if anyone out there can offer a loving home for 1 or 2 wonderful kitties, please comment on here or on facebook (Lynn Henderson McDonald).  Thanks!

Levi has been doing very well for the most part.  As noted in my last post a few weeks ago, his seizures are down!  Before we started Lamictal he was having 60-80 seizures a day, now he is down to 20-40!  He even had a few days under 20.  Then last Thursday he finally had his 6 month shots plus a flu shot.  That night he suddenly spiked a 104 fever, his eyes were rolling back in his head, he was having more seizures, and we were told by the doctor's emergency line to call 911!  That was crazy!  After an ambulance ride and several hours in the ER we were told that he was probably having seizures specifically related to the fever, which they do not treat because they go away with the fever.  Our neurologist said to increase clonazepam to twice a day for a few days, and in the future he can have only 1 or 2 shots at a time.  Now a week later, his seizures are still holding at 20-40, but we have not seen any more severely decreased days.  This morning we increased Lamictal from 4mls to 6mls.  I'm excited to see what happens now!  This is the first medicine that has actually brought the number of seizures down!  We still have a long way to go before he is at the max dose, so I'm praying and fully believing that Lamictal is going to wipe the seizures out for good!  Please pray and believe that with us.

That pretty well brings us up to date. We are very much enjoying our beautiful new house.  Again, if you can help our kitties, or know someone who can, we would be so thankful!  They are both loving, sweet cats and we want the best for them! 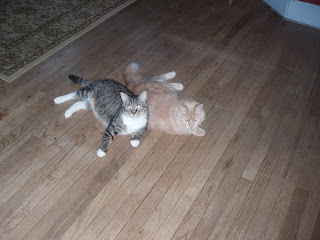 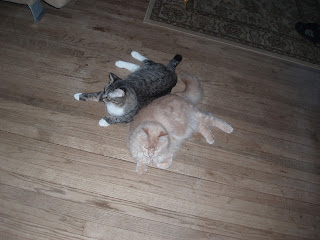 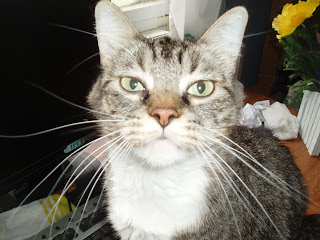