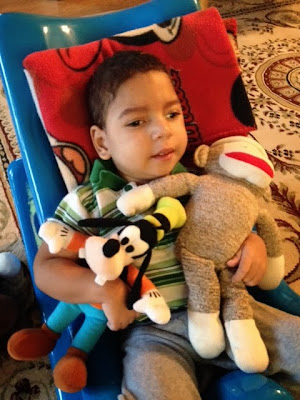 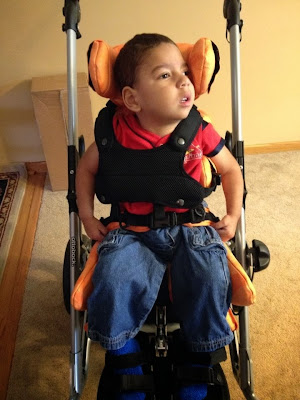 Home But Not Home Free

After 24 days inpatient, we finally went home on the 4th.  Levi kept having inconsolable screaming fits, so we ended up back in the ER the night of the 5th.  I needed to know that all was well with his tummy, and thank God it was.  He also had an x-ray of his hip since he's had hip dysplasia, the doctor wanted to be sure that his tight muscles hadn't possibly dislocated it.  That was fine as well, and actually showed growth from last year, so that was a definite plus!  They wanted to give him a dose of Ativan, which other doctors have wanted to do, and I've been against it because last year it caused him 2 hours of continuous seizing, even though it is a seizure recovery drug.  We figured since we were already in ER we might as well try it.  It did  cause extra seizures, but it didn't last long.  We brought a prescription home to use instead of oxycodone.  It's possible that all this unhappiness is due to withdrawal from morphine/oxycodone (which metabolizes into morphine).   He fell asleep on the way home and slept all day.  Yesterday was a little better, he had some wakeful moments without crying.  Our neurologist increased the Baclofen dose in case the screaming is caused from tight muscles, due to cerebral palsy.

Today has been a nightmare of screaming again.  I really don't know what's causing it.  It could be anything from pain to anxiety to anger.  We gave him a dose of Ativan and he finally fell asleep, and it didn't cause any seizures.  We see the neurologist tomorrow, and will hopefully be able to figure some things out to help Levi.
Posted by Lynn at 1:41 PM No comments:

I have made no secret of the fact that I don't like the GJ tube.  He has still been gaggy, has still vomited, and still screamed.  I don't feel like it fixed anything, and I've always had a feeling that it was uncomfortable for him and possibly causing him pain.  I've been told by every doctor that it doesn't, but I still couldn't be convinced.  I went home last night (thanks to Moga for staying with Levi!) feeling like I should just shut my mouth because no one was hearing me anyway.  I felt like the doctors were all sick of listening to my concerns.

Even though I was home, I just couldn't sleep.  Everything kept playing through my mind, and I knew I had been defeated, that I would just have to accept their answers and live with the GJ tube.  I talked to God, and had a wonderful prayer session.

This morning when I woke up I found out that the tube had clogged.  Immediately I felt that it was an answered prayer, and hoped that it would have to come out and I could go back to the mickey G button.  The first day of our admission over three weeks ago we met with the doctors and dietitian and decided to change formula, etc.  We had a plan, the last step of which would be a possible GJ tube if everything else failed.  I wanted to give that plan a chance!  If the GJ tube had to come out anyway, I didn't see a reason why we couldn't go back to a G tube.

I prayed about it and decided if the tube was able to be unclogged, then of course we would just keep it.  But if it couldn't, I would fight for the G button.  The outcome was in God's hands, and I found comfort in that.  It couldn't be unclogged, and WOW did I have to fight to change it! Even our primary GI doctor didn't agree with me, but I stood firm.  They did everything but tell me I had no choice, and they certainly made it seem like I didn't.  So I flat refused to sign for a GJ tube.  Those of you who know me know how very much this is outside my character, and my comfort zone!  I hate confrontation!  Thankfully by the end Patrick was here and he supported me.

Did I make the right decision?  Only time will tell.  All I can say is that I felt beyond a shadow of a doubt that the GJ was causing problems.  Levi's quality of life rests on my shoulders, and I always want to do the very best for him.  We can't see into the future.  We can only make the best decisions that we can with the knowledge presented us right now.  There was really no "right" answer here, just a choice between two different paths.  I pray the path I chose will be good for him.
Posted by Lynn at 7:21 PM No comments:

To Go Home or Not To Go Home...That is the Question!

Levi is much improved in many ways.  He seems to be almost completely healed from the tonsils and adenoids surgery.  He just has a bit of residual discomfort when yawning or coughing.  As we hoped, this did cure his breathing problems.  He can breathe easily and quietly now, even with his mouth closed!  I wonder if his throat was sore much of the time before the surgery.  The tonsils were always red and bumpy.  I'm hoping this also leads to better swallowing in the future, so he can begin to eat some things by mouth.

Even though he now has a GJ tube that feeds directly into the intestines, and it was my impression that he should tolerate feeds much better, he has not.  Within two days after it was placed he was gagging and vomiting again.  I was concerned that the tube had slipped, but the doctors were not concerned.  On Sunday he had a wonderful day, sitting up on our laps, holding his head up, interested in his surroundings, but then for most of yesterday he was constantly whining, gaggy, and did end up throwing up with "coffee grounds".  I decided to take him outside to the playground, and that perked him up substantially.  He had a great night, we both had the best night's sleep since the surgery.

I'm so ready to go home, but I don't want to get there and have to come right back.  I'm still concerned about the GJ tube.  Thankfully Dr. Mangalat is back on service today, and she knows him very well.  I plan on asking if she will take an x-ray to be sure the tube is in the correct position, and I have many more questions for her.  It occurred to me yesterday that at home he was no longer tolerating continuous feeds, and maybe that's why he is still having issues.  Maybe he needs bolus feeds instead, in which case we would have to revert back to the g-tube (which wouldn't hurt my feelings, for some reason I really don't like the GJ tube!).  So I'll be waiting with bated breath to see her today!

On a very bright note, the seizures have decreased dramatically!  We see one here or there, but they are all but gone!  It must be due to getting his entire calorie and fluid requirement. I couldn't be happier about that!
Posted by Lynn at 7:50 AM 2 comments: