In Hospital With Nasty Adenovirus

Last Wednesday (it is now Monday) Levi was admitted to the hospital with breathing problems, congestion, sleeping almost nonstop for three days, and fever.  Of course, these are all symptoms of a shunt malfunction or infection.  (The shunt drains excess liquid from his brain and empties into his stomach).  Thankfully, the shunt is in great working order.  Levi has a nasty adenovirus.

This past week has been rife with ups and downs.  He will get better just to get worse again.  Finally, I think, we have turned the corner for the better.  Last night, Levi's breathing was much worse, coughing with just about every breath, so much congestion his nose and mouth were being suctioned very often, and he was just all around miserable.

The doctors ordered albuterol breathing treatments, which he'd been getting as needed, scheduled every four hours, with treatments in between if needed, and an airway clearance vest that literally shakes the mucus loose from the chest.  He loves it!

All morning and the greater part of the early afternoon he sounded horrible.  Even the respiratory treatments were not helping for long.  Once the treatments started coming closer together, and we cuddled together for a long time, Levi was able to relax.  His breathing settled, and he was able to sleep well.  Here's hoping that the worst is over and good days are on the way! 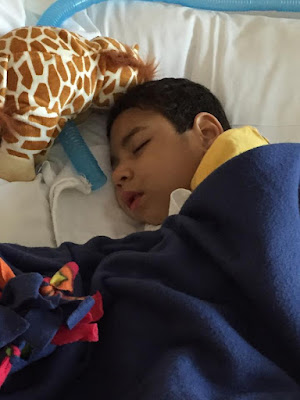