A Little Bad, A Lot of Good!

Levi's been doing so well lately!  We have come all the way down from 6 pills of Topamax twice a day to 3 in the morning and 4 at night.  Unfortunately, the last few days his seizures have doubled, so this morning I increased back to 4 pills.  I will talk to his neurologist in a couple days to see what she thinks, but I just couldn't watch him having seizure after seizure like that again.  And to think he used to have many, many more than that every day!

We took the week off therapy appointments, but Levi and I have been working together and he's doing great!  I laid him on the floor on his side with some toys and, as usual, he was able to roll almost to his tummy, but he's never been able to get his arm out from under him.  It makes him mad and he fusses, so I tend to help him out.  Well, I realized this is not really helping him, so I let him figure it out on his own.  He fussed lightly, but after a while he did get him arm out!  I was amazed and thrilled to see that!  I've also realized that I hold him like a newborn way too much, so I've been sitting him on my lap and putting him in positions to encourage him to hold his own head, and he has definitely risen to the challenge! When I carry him up on my shoulder now he holds his head up and looks around.  It's too cute.  While I walk his little head bobs a bit, but he can keep it up when he wants to.  I'm seeing so many differences in him now, it's so exciting!  I think we're finally to the point where he is learning and becoming interested in what's going on around him.  He's been putting his hand in his mouth!  I can't wait until he starts reaching for things!  What a blessing this little guy is for us! 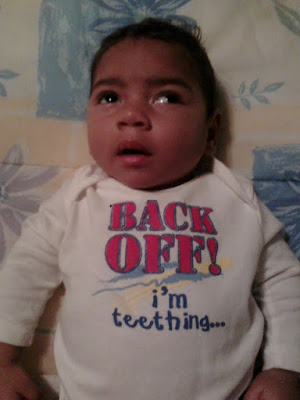