Levi has yet again been throwing up and screaming.  Tuesday night he threw up all night, we couldn't even get him to keep down a very small amount of Pedialyte, so off to the hospital we went.  Daddy stayed with him while I went back home for a therapy meeting, which also included transition from at home therapy to going to school.  I met Tony, from the school district, and liked him right off.  The next few months we will work together to have everything set for him to start at William Bedell ARC in December, the day after he turns 3.  We chose this option over regular preschool because it's therapy intensive, and that will be so good for Levi.

Back at the hospital, nothing has really happened.  He's on IV fluids, Nexium, and Zofran.  As usual, they will be holding his feeds so his tummy can rest.  We are waiting on results from the gastric emptying scan that was done at SLU on Monday, and hoping that will shed some light on the situation.  We discussed my plan to wean down the ketogenic diet to rule that out as a possible cause for the GI problems, IF the gastric scan is normal.  If it is not normal, I think we'll probably be discussing changing his feeding tube from a G tube (in the stomach) to a GJ tube (in the stomach and small intestine).  Hopefully we will find out today.

He had a good, restful night.  He needed it!  The poor guy was up the majority of both Monday and Tuesday nights, and he doesn't like to sleep away daylight.  He should feel better when he wakes up.  Thanks to everyone who is praying for our little guy! 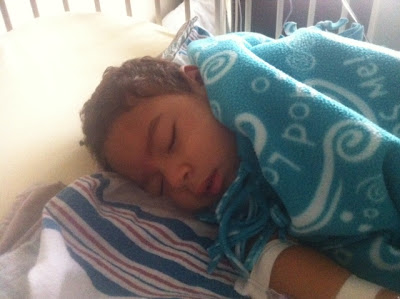