Blessings Within the Trials

It's been five weeks since the colostomy surgery, and Levi is just starting to smile again.  The last several weeks have been a nightmare of screaming, ER visits, trying to figure out what is hurting him, and what will ease the pain.  He has a prescription of Oxycodone that I use sparingly, but when Tylenol and Advil don't work, I have no choice.  Over the last few days, he has been feeling better.  When he screams now I just go straight to a half dose of Oxycodone, which takes away the pain quickly and usually lasts the whole day.  He has graced us with a few precious smiles, he is beginning to enjoy being bounced and played with again, and looking at and holding his toys.

I have received preliminary results from Cincinnati, which showed that a portion of his colon works normally, while another portion is weak, and yet another is inconsistent and "misfires".  They say it has to do with the brain/gut connection.  All the results have been sent to our GI, Dr. Rosenblum, and we meet with him on Tuesday to discuss options.

Even through the darkest times lately, we have seen some great blessings.  Levi has not vomited since the colostomy was placed, and he is actually gaining weight now.  He has never cared for pacifiers, last summer he quit taking the bottle and lost the sucking reflex altogether.  A couple weeks ago he began sucking on my arm, which was such a surprise it took me several days to even think of trying a pacifier.  He took it!  He couldn't keep it in his mouth on his own at first, but now he can use the larger ones on his own for a very short period of time.  Even better, he's sucking on his hand now, something that he has never done before.  The big deal about this is that for the first time he's showing hand to mouth coordination!  It always astonishes me when, in the toughest of hardships, a bright light shines through the darkness.  But isn't that exactly what Jesus is?  So why would I be surprised?  I guess sometimes it's easy to get so wrapped up in the trouble and despair that I forget who is ultimately in charge.  I feel like it's those times the Lord shows me that he has everything under control.  There will always be a light shining in the darkness, and it grows larger and larger until the darkness is completely eradicated.  Jesus, pure and simple.  As my little nephew once said, "Thank God for Jesus!" 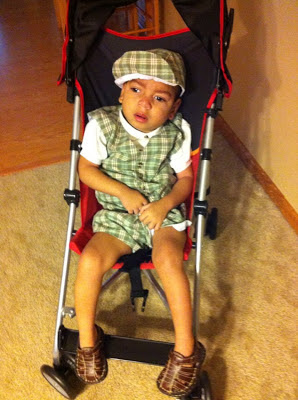