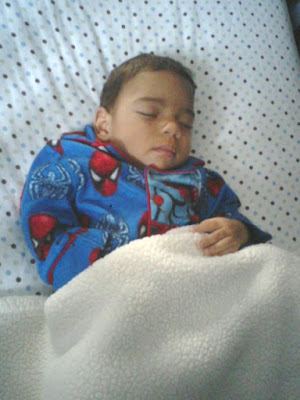 Next we saw the orthopaedist. As you know, Levi had a spica cast for 6 weeks to correct hip dysplasia, and has been in a rhino brace for the last 4 months. X-rays showed that his hip is doing very well and the bones are coming in as they should be. Although still a bit shallow, his hip is very sturdy and feels great. So, he still has to wear the brace at night, but he has no restrictions during the day! He doesn't need to use the stander, which he hates, so that's a good thing as well!
Posted by Lynn at 10:05 AM