We were happy to see that Molly was indeed the OT who came to evaluate Levi's eating.  I was hoping she would say he did well, but that was not the case.  She said he still chews everything pretty much in midline, like an infant, instead of pushing food to the sides of his jaw and chewing.  She has a few concerns, but we'll know more once the swallow study has been done.  He is scheduled for both the swallow study and an upper GI tomorrow.

Levi couldn't eat much of his food for gagging.  We just went ahead and stopped trying so he wouldn't vomit what he'd taken in, which included the antibiotic for the ear infection.  He now has an NG tube down his nose, and is at the moment trying a one ounce feed to see how his tummy tolerates it.  If all goes well they will start with 6 ounce feeds four times a day of the ketogenic formula and mct oil, which adds fat needed for his diet ratio.

We have decided to go ahead with the G tube.  All teams of doctors agree that it is necessary.  I did my very best to keep him from it, but we just can't get enough volume down him.  Evidently the tube feeds will be continuous through the night, then he can have a couple snacks or meals during the day.  It doesn't sound as bad as I thought.  So I've come to terms with it and am now on board. At this point, I'm hoping they can do the G tube while we are here, so we don't have to come back for it.  There again, we'll know more after the tests tomorrow.

When we went down to the cafeteria to get supper we were surprised to run into our friends Amy and Doug.  You just don't expect to run into people you know at the hospital. lol  Their daughter broke her hand.  Poor Cassidy!!  They are in our prayers, and it was so great to see them and their daughter Allison!! 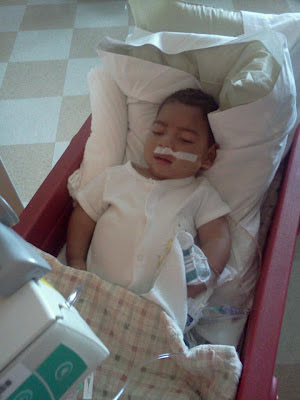