As you know, the ketogenic diet has been a bit of a challenge, in that the volume of food is sometimes more than Levi can take.  Over the past weeks I've been trying to create meals that he likes, and we've had great success, but have still had to force feed him once he is full.  (Sometimes he begins the meal already full!!)  He won't drink the heavy cream from a bottle, it's too much to give him in a cup, and although he likes it whipped, he just can't always eat it all.  So I set out on a quest to find alternate choices of keto friendly foods that are high in fat.  Enter coconut oil.  I know that this is high in the good fats, triglycerides, and helps to raise and maintain ketones.  We have been using it as a skin moisturizer since, sadly enough, Johnson's baby lotion is not keto approved because it contains glycerin, which contains carbs. Yesterday I calculated a meal with coconut oil and absolutely NO cream!  It mixes easily into many foods, and the volume is so much less!

Today I made him a peanut butter cup using unsweetened baking chocolate, coconut oil, peanut butter, vanilla extract, and liquid sweetener. I'll be trying it out at lunch.  I'll also be trying to put it in his mouth and have him bite pieces off.  Now that he has 5 teeth (he just cut a new one!) this shouldn't be a problem for him.  The best thing about it is that this little peanut butter cup, about the size of 1 Reese's, is his entire meal!   I tasted it and it was pretty darn delicious!  I hope he likes it!  So continues the quest for new meals sans heavy cream.  All I gotta say is, thank GOD for coconut oil! 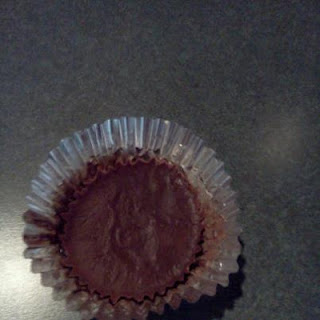