Levi has lost a little more weight.  He seems to run the vomiting cycle about twice a week lately.  Once he starts, we stop his formula feeds and give him only water or pedialyte, but it doesn't make much of a difference.  For some reason it's hard for him to stop, and it can take up two days before he will tolerate formula again, and a few times he's had to be hospitalized for IV fluids and testing.  Last week during a particularly excessive vomiting cycle, I asked Dr. Rosenblum for Zofran, an anti-nausea medicine that he had once in the hospital.  My theory is that if we can stop the cycle, he will not have to go without nutrition for so long, and can begin to regain the weight.  The doctor isn't a fan of Zofran, but he did prescribe it, and it's working very well.  One dose stops the cycle, and after a couple hours he's back on formula.  So far so good!  The Dulcolax suppositories are still working, but taking anywhere from 3-5 hours before producing results.  We have now doubled the dose, and it's working in 15 minutes!  We are also using it as needed, instead of just twice a week.  He has been started on Erythromycin, an antibiotic that has side effects of diarrhea, and has been found to promote intestinal motility.  It has caused a lot of stomach grumbling and distention.  I'm not sure if it is because the intestines are moving and he just isn't pushing out the stool, or if it's promoting gas, or if he's just not tolerating it.  Time will tell.  The referral for the motility clinic at Nationwide Children's Hospital in Cincinnati has finally been sent.  I should hear something from them this week.  I'm praying we can get in fairly quickly.

On the neurological front, we have taken the second decrease in Phenobarbitol.  The last time we decreased we noticed a lot of learning and more body movement, so I'm excited to see what he will do this time.

Even though he's still having these issues, Levi has been happy and bestowing smiles on us.  He's sleeping well at night as long as his tummy is feeling fine, doing great in therapy, and is overall in a good mood.  We are working on tiny flavors to promote interest in food.  I let him bite a little into my apple yesterday, and he smiled.  Since he's never cared either way for food, that was a shining moment!  We are very much looking forward to getting rid of this crazy snow (we received 15 inches a few days ago!!) and welcoming warm weather so we can go on walks and sit on the porch swing.  Levi LOVES to be outside!! 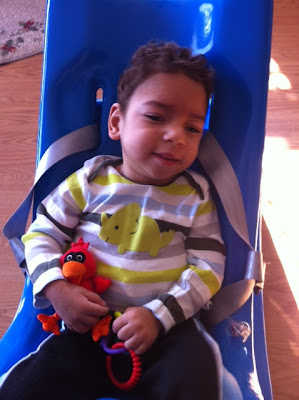 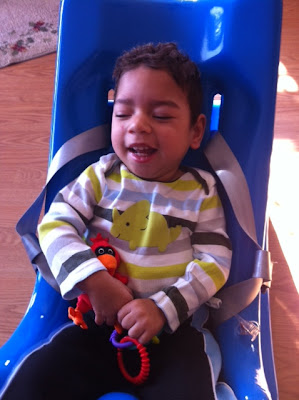