I was ready for a fight this morning.  I've been wanting the feeding tube site checked out almost since it was placed, and am tired of accepting the doctor's reassurance that it's fine.  I made my feelings known, and he was very receptive.  He said Levi's blood seems to be taking a little bit longer to clot than it should, so he ordered a Vitamin K shot and will check the levels again tomorrow.  He said it could also be caused by liver problems, which thank God he doesn't think is the issue, but he's ordered a blood test to check liver function, and another round of blood tests to check several different areas.  Tomorrow he will be doing a contrast, which I think consists of putting liquid through the tube and following it with x-rays to be sure that he doesn't have a blockage up high.  He will try to schedule an endoscopy on Tuesday, which is a scope that goes down the throat into the stomach so they can look at the lining and see if there are lesions, etc.  Hopefully they can get a good look at the feeding tube site from inside with this.

All in all I'm happy with the plan, and hope that it sheds light on the core issue so it can finally be fixed, and I'm praying that the liver is functioning normally!

Levi's morning did not go very well, he's been cranky I'm sure due to having an empty tummy for so many days.  He has been on a slow continuous feed for a couple hours now, and he's beginning to feel better.  We're hoping the afternoon is better for him. 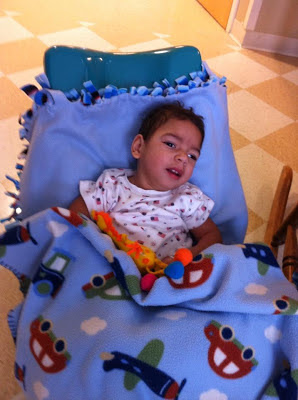