Today Levi had his 12 month checkup.  He's a bit behind because he was sick during his original well checkup, so we had to use it for a sick visit.  He was in a good mood today!  The nurse kept commenting on how happy he was.  We got to chat with my dear friend Pam for a while, which was wonderful.  Since he spiked such a high fever with some seizure activity on the last round of shots, the neurologist wants him to have only 1-2 at a time, and I feel much more comfortable with only 1, so he had the MMR (measles, mumps, rubella).  He fussed only a little bit.  The nurse was hugely impressed. Then the poor little guy had to have some blood drawn.  Again, only slight fussing.  He got his very first sticker for being a good boy at the doctor's office!  A big picture of (who else??) Lightning McQueen!  Way to go, Levi!

The pediatrician says he can switch from formula to regular milk, as long as the GI doctor doesn't have any reservations about it.  She is checking his electrolytes and nutrition because she's concerned about slow weight gain.  I'm not too concerned.  Miranda was always a tiny little thing.  Also, Levi is on so much medication it's a wonder he eats as well as he does!  So we will also be checking with the GI doctor about what types of food would be best for him nutritionally, that will help him gain weight.

A few days ago Levi had his very first milk and cookies.  I soaked vanilla wafers in a bowl of milk and chopped it up like cereal.  He wasn't too fond of it.  I'm not sure if it was the cold temperature, the taste of the milk, or all of the above.  The pictures below are of this experience.

The seizures remain about the same.  Some days are light, some are heavy.  One day he didn't have any seizures until two hours after he woke up.  That was a first!  He is still sleepy, but doesn't sleep as much through the day, and is definitely more alert in the afternoon.  Saturday we will increase Clobazam and decrease Phenobarbital again.  Hopefully we will see very positive results!! 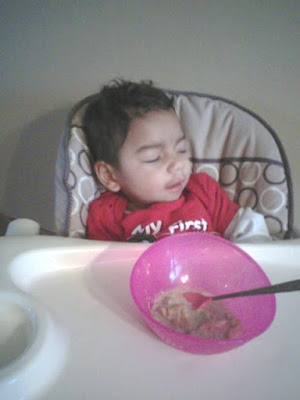 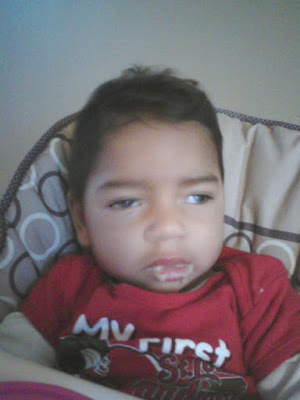 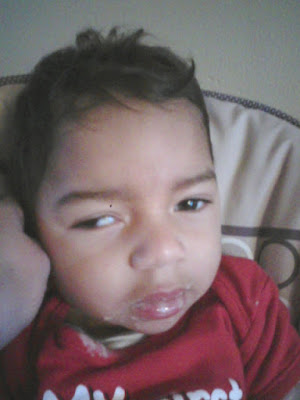 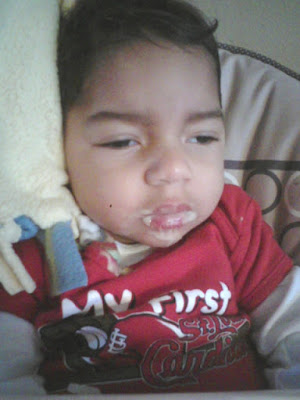