On Tuesday Levi had a CT scan and a visit with the neurosurgeon.  The CT showed that his ventricles have grown considerably, the water in them having pushed his brain into the outer edges of  his head.  We set an appointment for Monday to place a permanent shunt, which will drain the fluid from his brain into his stomach.  Since our appointment Levi has grown progressively more fussy and had periods of being completely inconsolable, which is not at all like his normal disposition. He was also sleeping much more and his head seemed to have grown.  We contacted the neurosurgeon and were instructed to bring him in to be admitted and have the surgery earlier than planned. 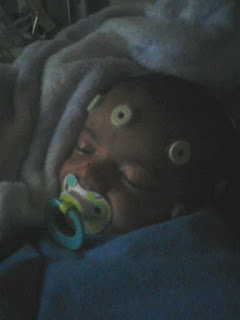 Levi is resting comfortably for the most part now and we are waiting for his surgery to be done today.  The doctors tell us that he should feel much better right after the operation and he will be more awake.  I'm excited to see that!
Posted by Lynn at 6:57 AM