On Friday we went back to Cardinal Glennon for an ultrasound of Levi's head to check the size of his ventricles and to follow up with the doctors regarding his picc line and general health.  The visit with the doctor went well.  He is gaining weight and regaining movement of his limbs more and more every day.  In fact, today he was kicking his left leg! Dr. Simmons was able to stop by to see him, and we were glad to see her!  The ultrasound showed that his ventricles were larger so we had to go down to the neurological department so he could be assessed.  The doctor said he is fine, he shows no signs of his brain being under pressure, and the ventricles were most likely larger because the tissue around them are contracted.  We stopped by the TCU and PICU to see our nurses.  It's so rewarding to be able to walk back in there with a much healthier baby, and they are thrilled to see him in such a better condition!  We had lunch in the yummy cafeteria and were so thankful that we were only visiting and no longer living there!  He has another appointment this Friday.

As far as development, his arms are moving about equally now, his right leg moves very well, and his left is getting better every day.  When we left the hospital 2 weeks ago he was eating just over 2 ounces a feeding and now he is up to 4-4 1/2 ounces!  He weighs 7lbs 13oz!  He has grown into and then out of some of his clothing in just this short amount of time!  We are so excited to see him growing and doing well!  Thanks again for all the prayers!  We will keep updates coming! 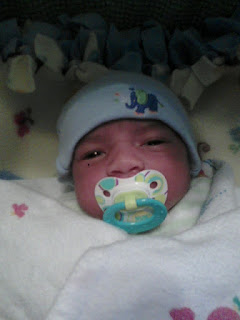 Check out his chubby cheeks :) 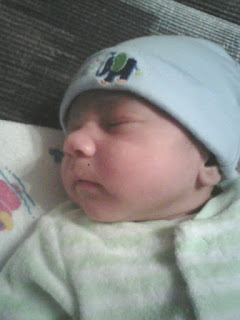