Well today the waiting game has ended.  It's been a few days since Levi has pooped, and that's all we were waiting for to be discharged.  I was concerned this morning because he starting exhibiting signs that he would begin throwing up sometime today.  It's been a vicious cycle of no pooping and throwing up.  So they decided to give him an enema and then possibly discharge.  When the nurses put him in bed to do it, though, they found he had already overfilled his diaper all on his own!  Even better, it wasn't the pure liquid that it's been for the last month or so, but pasty.  (I know this might be gross to some, but all you moms out there will understand.)  So now they are working on discharging us.  Praise GOD!!

This is the first day in a very long time that he has been content to be on his own without being held.  He's been hanging out on top of fluffy pillows in the hospital wagon all day.   After his big poop he's been grinning ear to ear, and I can tell he feels so much better already!  The plan for action to eradicate the ileus in his intestines is simply to remain giving 24 hour continuous feeds at 1 ounce an hour for a couple weeks, along with Miralax twice a day, and a suppository once a day.  We will see his regular GI doctor in a week or so and see where we stand at that point, and if we can begin giving smaller bolus feeds. I'm thankful that this plan has worked to "wake up" his bowels, and that we didn't have to resort to more medication.

As far as the feeding tube button goes, I'm still not thrilled.  It looked wonderful the day after the nurse cauterized it, but already the granulization is growing again and leaking bright pink fluid.  This is a battle I do not want to fight, but I just don't have a choice.  I do have the option of just letting Mom take care of it, but I just don't like to give up like that.  The surgery nurse, Grace (an angel sent straight from Heaven), told me not to think about it so much.  She said it might do this for a while, but it doesn't hurt him and it's ok.  I just have to keep reminding myself of that.

I'm thankful that Jesus has yet again brought us through a very trying, stressful time and is healing Levi again as he has numerous times before.  I just don't know how I could have gone through everything in the last 20 months without my faith.  And a huge thanks to everyone who has been supporting us and praying! 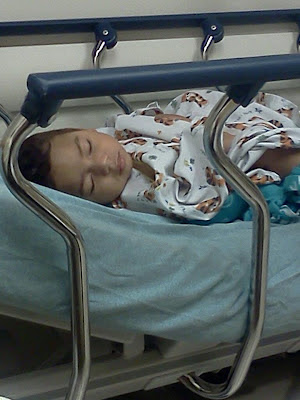 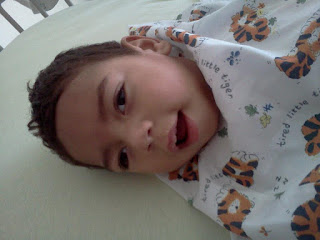 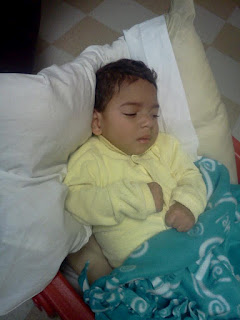 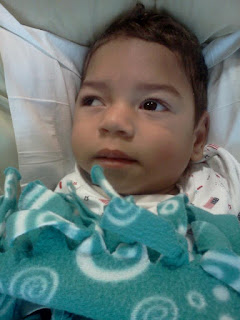