So the Upper GI and small bowel series tests came back normal, thank God!  Levi was very happy the day of the testing and we were hopeful that the worst was behind us.  It was, but his recovery from the gastroenteritis has been slow at times.  He has had good days followed by bad.  He's still having bowel issues.  His tummy grumbles all the time, and he's taking Miralax twice a day, but with no results.  We have had to resort to using enemas when he goes four days without a dirty diaper.  This is painful for him, and add teething to that as well.  He still has the huge cyst on the right side of his mouth, but thankfully the one on the left side has burst, and he's actually cut his first molar!

Wednesday he had the G-tube switched to a button.  The button is a small device on his tummy which comes with a removable tube.  It's much, much easier to navigate and use than the old tube was.  He can have tub baths and swim now.  However, it's causing him a LOT of pain.  Some tissue, called granulization, has grown up around the tubing.  The nurse cauterized it with a silver nitrate stick.  Patrick and I had to cauterize it again this morning.  He's been crying for the better part of the last two days.  The button is bothering him so much that he was pushing against it so hard it was pulling out of his tummy.  Patrick wrapped it with an ace bandage so it would be more secure, and this must have made it feel better because he fell asleep and took a 3 hour nap. We had been alternating Tylenol and Advil every four hours, but he was still in so much pain that I contacted the surgeon in the hopes of receiving a prescription for something a little stronger.  He told us to alternate every two hours instead of four for a little while.  That has made Levi feel a bit better.

Hopefully tomorrow he will feel better.  I plan on calling the GI doctor Monday about the continued bowel issues.  We would greatly appreciate prayers for Levi!  Please pray for his pain to go away, for restful sleep, and if there is a larger problem, that it be brought to light!  Thanks for all your prayers!! 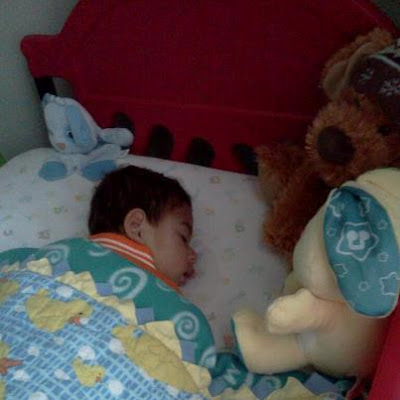