Tummy Issues, but What is the Cause?

Saturday was 16 days straight that Levi had vomited at least once a day.  We had had enough!  We took him down to only diluted Pedialyte that day, and he had no more vomiting.  The next afternoon we added chicken bullion soup, which is the next step for sick days on the Ketogenic diet.  He did well with that, too, so Monday we moved him to some feeds of Ketocal, the Ketogenic formula.  Instead of putting the feeds through a pump over an hour, we trickled it into a large syringe and let it flow into his tummy by gravity over about 15 minutes.  We began with one ounce and were able to progress over the next couple days to 2 1/2 to 3 ounces at a time.  He cried with the formula, but no vomiting.  Interestingly enough, he didn't cry when given water or Pedialyte.  So last night I decided it was time to try 4 ounces through the pump.  He did fine.  This morning I was expecting him to be absolutely fine and began another 4 ounce feed with 1/2 the prescribed MCT oil (this is a fatty medium chain triglyceride that raises the diet ratio to 3.5:1).  He fussed throughout the feed, but I didn't think too much of it.  Not five minutes after it was finished he vomited every bit of it.  How upsetting!  He had gone three full days without throwing up, I had really thought it was over!  He's been able to take dilute Pedialyte and small bits of formula again.  I tried to give him 2 ounces this evening but only made it through one before he began gagging.  I plan to start continuous feeds in the morning for the entire day so his little body can get the nutrition it needs.

We have a GI appointment on Friday, and I'm very much looking forward to hearing what his doctor has to say.  Originally when they planned the G-tube surgery they were also going to perform a Fundoplication (a stomach surgery to correct GERD, or reflux) but since he was taking goal feeds with no reflux the doctors decided that it wasn't necessary.  We don't really know what's going on, but we think reflux is unlikely since the Nexium has been controlling it, and the vomiting began so very suddenly.  Hopefully everything is fine and it's just taking his tummy a while to rebound after the extreme gastroenteritis.  Please keep Levi in your prayers!!


This pic was taken at our last hospital stay.  St. Louis Cardinals baseball player Lance Lynn was passing out Build a Bear toys wearing Cards shirts to the children, and he autographed the shirt.  He was so kind and compassionate, we really enjoyed the visit!! 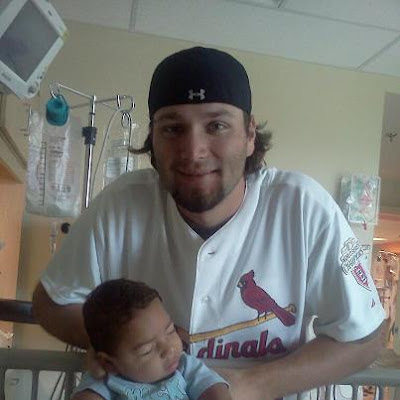 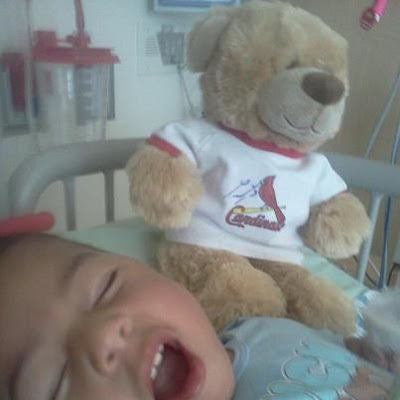