Around 4:00 this morning Levi started having more respiratory issues, continued constant secretions that had to be suctioned almost nonstop at times, coughing, etc.  He was moved to the TCU, where the pulmonologist laid him with his head slanted downward so the secretions would flow out of his mouth to gravity. That worked well for a couple hours, but the issues returned even more intense, so he was sent to the pediatric ICU.

The PICU doctor is interested in getting to the core of the issue.  Are the problems stemming from the tonsil and adenoid surgery, from his persistent GI problems, etc?  I'm thrilled to hear that he wants to get to the real problem and treat that, instead of just treating the symptoms.

A belly x-ray showed that he has a huge air bubble in his tummy, presumably from swallowing so much air these last several days.   They are replacing his mic-key button g-tube with a foley catheter to allow the air to drain out so it doesn't enter the intestines and cause even more problems.

Right now he is resting comfortably on his tummy in an odd position that allows his secretions to drain.  He is more comfy than he's been all day!  I will update as I have info.  Please continue to pray for Levi! 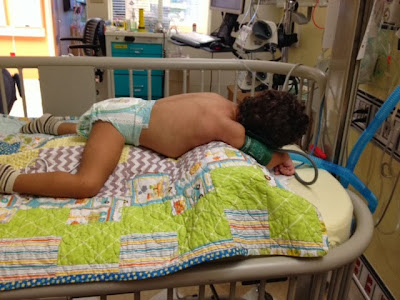 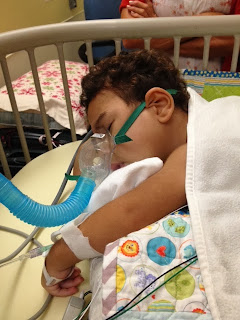