We had a hold up with the insurance, so it took us a few days to get the Banzel, but we picked it up and gave him the first dose late this afternoon.  It's in pill form, so we crushed it up and put it on top of his baby food.  He's used to taking Topamax like that, so it went off without a hitch!  He turned cranky about half an hour after he had it, which was quite a bit earlier than his normal crying spells.  The first day on Sabril he was extra clingy.  I think it's just the first day on a new drug makes him feel different and he doesn't understand.  Hopefully tomorrow his crankiness will be gone!  Please pray with us that this new med will STOP both types of seizures quickly!  The least amount of meds he's on the better.

We had a fun day spent in Edwardsville today.  We had lunch with a friend of Patrick's, and this evening went to a concert at the amphitheater on the riverfront, featuring a Journey tribute band and a Bon Jovi tribute band.  They were both pretty good.  I liked the Journey band the best.  It was warm, but we had a cool breeze, and it was definitely nice to relax outside.  Levi liked most of the music and of course he loves to be outside!  He's snoozing in Daddy's arms now, all fresh, clean and ready for bed :)

His seizures have still been down today.  They have been consistently low since last Monday.  The Banzel doesn't have too far to go to take them completely away, so hopefully that will happen very soon, on a low dose of medicine.  I will keep everyone posted.  Have a wonderful weekend! 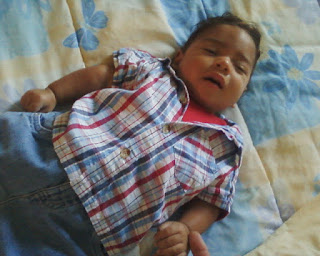 Levi and Mom at the concert 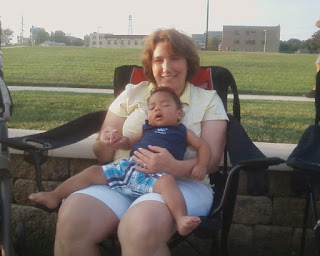