We increased the Topamax on Friday to 45 mg twice a day and noticed a drastic reduction in seizures on Saturday and Sunday!  Today we have seen a bit more, but still not nearly as many as before!  Praying that Topamax will control these seizures!  We had a wonderful BBQ with our small group from church on Saturday afternoon (which was interesting considering we are fasting meat, lol, but we had plenty of tasty food to eat!) and then on to church that evening so we could sleep in on Sunday.  Levi was happy to be cuddled by our friends and was terrific during the entire BBQ and continued his good behavior through church until about half an hour before service ended.  He was getting mightily hungry!  Sunday we relaxed around the house and Moga (my mom) sat with him while we did some grocery shopping.

Today Levi had both physical and occupational therapies.  He did very well through the first half of physical therapy, but was sleepy during the second half.  He had more than an hour nap before the occupational therapist came in, but evidently it just wasn't enough because he was extremely cranky!  I'm so glad they teach us what to work on with him in between visits.  Right now we are focusing on head control, bringing his hands together, different positioning, various stimulation such as toys, music, etc.  Twice this evening he almost had his hand in his mouth!  I could tell that's where he meant for it to go, but stopped just short.  That's okay, he'll get there, his brain is making important connections right now and it's great to see any small step in the right direction!  He's continuing to eat better which is a huge relief to me, and he's smiling more often.  Please pray with us that Topamax get these seizures completely under control in the very near future!  I am praying blessings on all of you!

Levi hooked up to eeg. 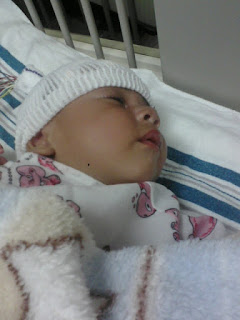 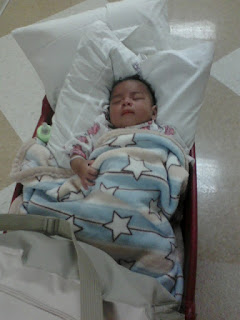 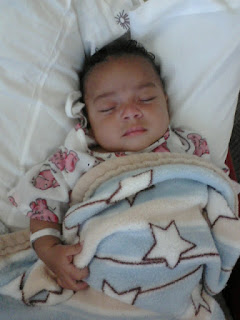