Over the weekend Levi continued to scream every waking moment.  This pattern of sleeping/screaming has gone on for days now.  Yesterday morning when the GI team rounded I was probably at the most frustrated I've been.  We had been in the hospital for a week, with no answers and no ideas.  All the tests had come back normal, and yet Levi was still screaming in pain and still having no bowel movements. His tummy was no longer distended, he was no longer vomiting and gagging, so Dr. Mangalat felt that the GI issues were resolved.  She decided to call in neurology and perform another x-ray of Levi's tummy, mostly to satisfy Patrick and Dr. Rhadans, who both  thought the GI issues were NOT resolved.  They were right.  Levi had been on no food for three days (he's lost over a pound since last Monday), one day of Pedialyte, and one day of Pedialyte diluted Ketogenic formula, and the x-ray showed that gas was already building up in his tummy.  Evidently the intestines are just not working at all, not even enough to pass gas, which we knew, but what is the cause, and the solution?  Dr. Mangalat decided to confer with our regular GI Dr. Rosenblum, who by the grace of God is on rounds at the hospital this week.  He came in this morning and has decided to do a lower GI (he already did an upper GI and small bowel series over a month ago) to look for blockage or some other cause for these issues.  Hopefully that will be done today.

Yesterday, also by the grace of God, our regular neurologist/epileptologist Dr. Gibbons was on call.  He has such a calming presence, when he walks into the room you just know everything will be ok.  We discussed starting Baclofen again, a medicine for cerebral palsy that loosens spastic muscles.  Levi was on that over a year ago, and it worked wonders for him, but just after we started he began having Infantile Spasms, and we were afraid that Baclofen caused it, but Dr. Gibbons said although it can cause seizures, it's unlikely that it caused a new seizure disorder.  So we began a low dose of Baclofen last night, and Levi also had another IV placed and began a pain medication, Toradol, which has helped immensely.  He's actually been comfortable and able to sleep.  Last night he also started sneezing, coughing, and having a runny nose.  Poor little guy!

At least we have a new plan of action, and we'll see what happens.  Thanks for all the prayers.  Please keep them coming!! 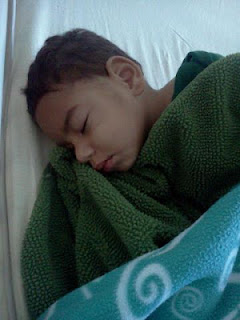