Yesterday Dr. Rosenblum decided to test for Hirschsprung's Syndrome. This is a congenital condition that is typically found shortly after birth, where the nerve endings in the intestines don't reach the rectum.  It is somewhat rare, and even rarer still to be diagnosed at an older age, which most likely means it is a mild case.  After having researched online, though, I can understand why they are testing for it.  Levi has nearly every symptom. The doctor performed a biopsy yesterday and we hope to have the results by the end of the week.  The treatment would be to surgically remove the part of the intestines that lacks nerve cells.

Levi slept all night last night, and has been more alert during wakeful periods today, though they are few and far between.. They have stopped all pain meds except Tylenol, which doesn't help him much, so when he's in pain he receives Benadryl. I wasn't thrilled with this idea, but he had the first dose today and when he woke up hours later he seemed to feel better.

Overnight he was on continuous feeds of 15 ml an hour Pedialyte/Ketocal blend, after again going about 3 days without food. That increased this morning to 30 ml an hour of straight Ketogenic formula. If he tolerates this (which he has very nicely) they will add the mct oil tomorrow to raise the diet ratio to 3.5:1, his norm, and then Monday proceed on to Ketocal 4:1.  Not only should this increase seizure control, but we can also get rid of the oil.

Friday he is having the cyst on his gums surgically removed as well.  Please continue to pray! 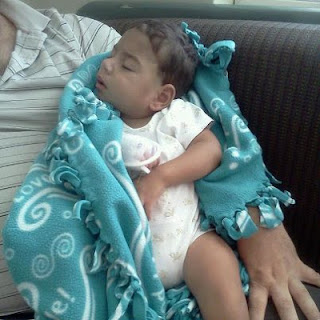