Today I'm asking again for prayers for Levi.  We've been out of the hospital for over a week, and he's not doing any better.  In many ways he's worse.  He's vomiting at least once a day again. Almost every morning he vomits when he wakes up.  Twice daily Miralax and once a day suppositories are just keeping him from needing enemas, but the stool is still completely liquid.  We can hear and feel the gas in his tummy move around all day long, but he's still unable to pass the gas.  Where does it go?  Is it just circulating through his already painfully irritated intestines?  The feeding tube button continues to grow granulation tissue almost faster than we can cauterize it.  It oozes and bleeds, making bandage changes necessary twice a day.  He seemed to be feeling alright this morning, and just as we were getting ready for church, huge gas pains overtook his little tummy, and he screamed and screamed for nearly an hour.  He's so wiped out from that experience that he fell right asleep and now, 3 1/2 hours later, he's still sleeping.  Since the surgery two months ago his sleeping pattern is messed up and (excluding this afternoon) he doesn't get enough sleep, even with the Melatonin we've added at bedtime.

We are calling his GI doctor in the morning to discuss all these issues.  He has been on continuous feeds/Miralax/suppositories for two weeks now, and we should have seen results.  Levi has been having these issues for two months now, ever since a few days after the surgery.  He's been in so much pain for so long, but he's a little trooper and fights so hard!  Let's flood the gates of Heaven with prayers for Levi today!  Let's ask for healing of all that ails him.  Jesus sees all and knows the cause of what is hurting him, let's all pray that He fix the issue once and for all!  Levi needs all of you to petition for him today! The bible (Mt 18:20) states "For where two or three gather in my name, there am I with them.”  Thank you for joining us in praying for Levi! 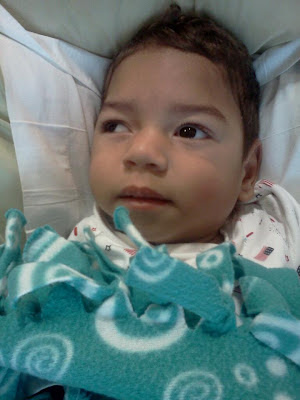