Today was a busy day for Levi.  The NG tube and the IV were both taken out.  He got a PICC line, which is like an IV but more permanent.  He will have to go home with IV antibiotics for about two weeks.  So far the cultures are still showing no infection from the shunt.  Since it's been over 24 hours since the cultures were taken, then most likely there is no infection present.  Thank God!

Levi has already met two out of three requirements for going home.  He hasn't had any fevers, and the stoma is working.  Tolerating his normal feed schedule is the final item he has to cross off the list.  Tomorrow they will start feeding him half strength Pedialyte at 10 mls an hour and once that is tolerated he will progress to half strength formula, increasing by 5 mls every six hours or so, with a goal of full strength formula at 40 mls an hour.  We will go home on this continuous feed, which is what he was on before the surgery, but we will be able to begin increasing to bolus feeds again.  I'm excited about that.  I'm not a fan of continuous feeds through the day.

He has had a couple issues of dropping/irregular heart rate while he's been in a deep sleep.  He's had two EKG's and a consult has been put in with a cardiologist.  Dr. Fitzpatrick doesn't think it's an issue, but she wants to be sure it's checked out.

Some of our 2 South nurses came to see us yesterday, and I ran into a couple others in the cafeteria.  We miss them and hope to be moved down there when we are downgraded from TCU status.  Our TCU nurses have been outstanding, though!

This morning Levi hit a rough spot with pain, and again this evening.  The rest of the day he was awake and alert frequently.  Now he is snuggled in bed for the night, and I'm about to do the same thing.  Thanks for keeping him in your prayers!


Headed down to get the PICC﻿ 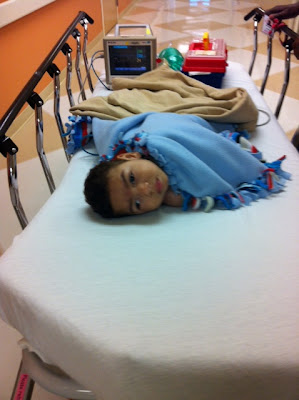