Today was not a good day for Levi.  He woke up early throwing up.  I know, not too much off the norm for him, but he continued to feel poorly through the day.  He just needed to be held all day.  Around 3:30 he started screaming, and he didn't stop but for very short periods of time.  About 8:00 we decided to take him to Cardinal Glennon ER.  After the usual bout of testing, we were told that the surgery team would be coming down to talk to us.  Apparently the x-ray showed that there is gas in his belly, outside of the intestinal tract.  It could be from changing the button today, but it could be a torn colon, a problem with the appendix, or something similar.  The surgeons said they didn't know exactly what they would find and expect the surgery to take an hour and a half.

I guess I wasn't too horribly surprised about the surgery, considering what he's been through the last eight months, but I was surprised when I was told they would operate within the hour.  It's a scary thing to have your child readied for surgery spur of the moment like that, at 3:00 in the morning, and even more so when the realization sets in that almost the entire team of surgeons have been called in from home.

I have never seen Levi scream like today.  The poor little guy is hoarse and close to losing his voice.  Thankfully by the time they took him back to surgery he was at least feeling well enough to stop crying.

Levi has traveled such a long, difficult road in his little lifetime.  We are praying that this surgery will uncover the reason for all his GI problems since the feeding tube surgery, and reveal answers.

First and foremost we pray for his safety, and ask that you all join us as well.  Thanks for sending love and prayers for Levi!


So Cute! Levi was rubbing his nose and cheek on this gel octopus :)﻿ 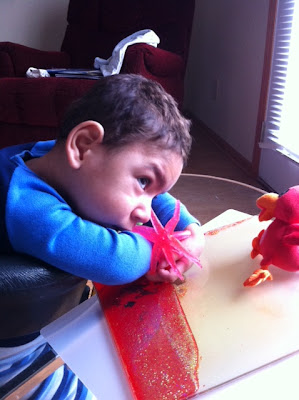