Dr. Herman was Tommy and Miranda's pediatrician, and we are so glad to be able to take Levi to him now!    He's an outstanding doctor with a fun, positive attitude.  Levi has had a lot of labored breathing since January. I've made an appointment with an ENT specialist, but I was looking forward to hearing Dr. Herman's opinion.  He said his lungs sound great and the issue seems to be in the nasal area.  Actually, everything looked great!  Levi has lost more weight, down to 19 pounds 3 ounces.  I was expecting even more of a loss because he's looking so thin to me, but maybe I'm just not used to seeing his little arms and legs bared all day.  He got the last two shots he needed, and now he is finally up to date!  No more shots until Kindergarten!  He wasn't happy with it, of course, and now he's trying to sleep it off.  I've given him Tylenol and am praying that he doesn't spike a fever.

We talked a lot about the bowel issues, and Dr. Herman will be faxing the referral to Cincinnati Children's!  Hopefully I will hear from them this week!

Dr. Rosenblum ordered a test to check his hemoglobin since he's had some more blood in his vomit.  The last two mornings he's woken up with some red blood on his sheet.  At first I thought it might be from teething, but I noticed it after he retched last night, so I'm just not sure.  I tried taking him to Quest to have the blood drawn, but they were unable to get it.  I so much appreciated the lady's honesty, though, in telling me that she couldn't find a good vein instead of sticking him countless times first.  She also tried to do a finger stick, but he curled his fingers up tight.  The right hand was nice and loose, but as soon as she took hold of it, he crunched up his little fist.  He was having none of it!!  So when Patrick gets home we will head out to Cardinal Glennon to have it drawn.  Hopefully Levi won't mind the drive. 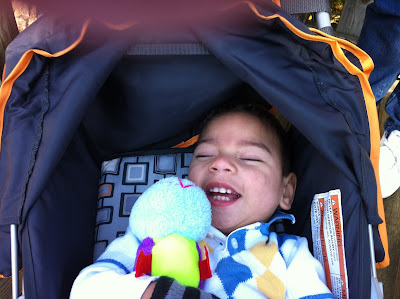