"I'm So Glad You Found Me In Here"

I love to read.  When I read, though, I do it for entertainment, to escape reality for a short period of time and be someone else, go somewhere else, do something else.  My particular favorites are Lynn Kurland's time travel romances.  They are so much fun!

I don't typically like self-help or any type of serious books. A friend from church told me about a book regarding Autism, and that he thought of Levi the whole time he was reading it.  When he gave it to me, I promised myself I would really try to read it, but I wasn't excited about it.  I brought it into the house and noticed the title, I'm So Glad You Found Me In Here, and was instantly interested.  This book was written by a non-verbal Autistic man and his mother.  I was bawling like a baby before I made it through the introduction and prologue.  I just started it this morning and haven't finished it, but it's so engrossing I've found it hard to put down.   This man, Matthew Hobson, was diagnosed severely mentally handicapped at a very early age because he could not speak, point, or perform many other actions that were deemed "normal".  When he was eleven, his mother learned of Facilitated Communication, which involves someone applying resistance to the non-verbal person's hand so they can use a keyboard.  This opened up a whole new world for Matthew, and his parents discovered that although his body did not work like ours, his mind has always been sharp and intelligent.  He began going to regular ed schools, graduated high school, and college!

I'm so grateful to Bob for giving me this book!  This story is so inspiring to me!  I have always said that there is more going on inside Levi than we know.  As he feels better physically, we have more evidence that he understands far more than is readily apparent, and his motor skills, vision, and other areas are progressing.  I think of the old saying "if the lights are off, there's no one home".  Sometimes Levi's lights appear to be off, but there's definitely someone home.  He just can't get to the door. 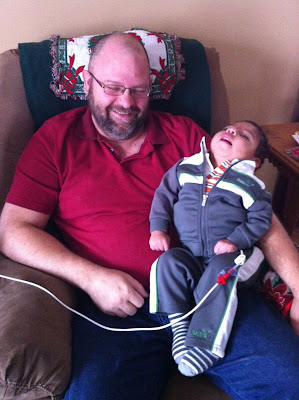